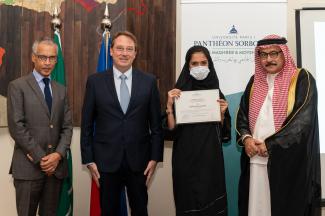 Following the second edition of the Paris 1 Panthéon-Sorbonne & UBT Law Summer School, a certification ceremony was held on 25th March at the French General Consulate in Jeddah, Saudi Arabia.

Organised by the Centre for Middle East and North Africa of Université Paris 1 Panthéon-Sorbonne in partnership with the University of Business and Technology, the second edition of the Law Summer School was held online in the summer 2020, gathering nearly 30 Saudi students who had the opportunity to take courses of public and private international law during two weeks.

In order to reward the efforts of the students who attended the Law Summer School, a certification ceremony took place at the General Consulate on 25th March. H.E. Ludovic Pouille, French Ambassador to the Kingdom of Saudi Arabia, opened the ceremony with a speech, followed by Mostafa Mihraje, Consul General of France in Jeddah.

Representatives of the teaching staff who contributed to this edition of the summer school (François Ameli) and of Paris 1 Panthéon-Sorbonne’s International Relations Department via the Centre for Middle East and North Africa (Marcella Rubino) also addressed the participants and congratulated the students through a video message. All attending students were then awarded a certificate of completion for their enrolment in the summer school, in the presence of other representatives of the University of Business and Technology including the Chairman of the Board of Trustees, the President, the Vice-President and the Dean of the College of Law.

We would like to congratulate the students for their successful participation in this summer school and wish them all the best in their future academic and professional projects.

The third edition of the Law Summer School will be held next summer.